With great sadness we inform you that one of the most colourful women of the Dutch sex workers’ advocacy community has died on December 2, 2020, at the age of 66. Educated as a historian and philosopher she devoted her working life to the emancipation of sex workers. Since the early 80s she tirelessly wrote articles, conducted research, delivered speeches and lobbied in all kind of ways. Whenever she met a politician, physician, policeman, social worker, researcher or journalist, she never let them off the hook before she had told them how to design an effective and humane prostitution policy. With her signature glass of white wine in her hand she was an unstoppable force, speaking truth to power.

From 1990 to 2010 she was the policy officer of De Rode Draad, the Dutch prostitution advocacy organization. She designed and conducted field trips in brothels throughout The Netherlands, stunning policemen and health workers as she “just walked through the front door”. It was a sight to behold: a fragile, middle-aged women ignoring the gorillas at the entrance. With her analyses, criticism and proposals she was one of the persons who shaped the theory and practice of prostitution policy in The Netherlands. After the legal reform in 2000, which raised hopes for a true realization of sex worker rights, she persuaded representatives of the police, local administrators, health and social workers, tax inspectors, the media, and many more, to rethink their attitude and reform their activities. On the issue of trafficking her conviction was that the numbers were inflated and that the aim of public intervention should not be to criminalize clients and “save victims” but rather to improve the working conditions of sex workers and inform them of their labour rights in order to give them the tools to make their own decisions. At international meetings she challenged the Swedish delegation when they spoke about how women were forced to sell their bodies. Then she replied “Oh no, at the end of their shift they take their body home with them”. This is one of the many examples of her trademark sense of humour that she used as an effective debating weapon.

She published many books in Dutch about different aspects of the sex trade. One is translated in English as Stolen Lives. Sietske was also a skilled researcher. Her last scientific contribution was an international study with Hendrik Wagenaar and Helga Amesberger, published as Designing Prostitution Policy. Intention and Reality in Regulating the Sex Trade (Policy Press, 2017, see below for a free download). Based on careful evidence from analysis of local policy practices in different countries, it shows in detail that repressive measures are not only ineffective but generate all sorts of negative unintended consequences. The book ends with a short study of the New Zealand decriminalization approach. On the evidence of this, it concludes that including sex workers in the design and implementation of policy – collaborative governance – is the best hope for an effective, rights-based approach. Sietske was also a valued member of a large European COST project: “Comparing European Prostitution Policies”. Recently she finished the manuscript of a historical study on the prostitution in Rotterdam. It is our task to publish it.

After De Rode Draad had to cease its activities in 2010, Sietske shifted her energy to record the history of De Rode Draad and of prostitution in The Netherlands in general. She started a website www.sekswerkerfgoed.nl where she collected everything she had ever written or came across, thus building an ever-growing collection. Some years ago, Sietske set up a foundation and decided that her complete heritage should be donated there. Together with all her writings there will be a considerable amount of money to finance those activities that will keep her spirit and legacy alive.

Dear Sietske, it was wonderful to be a companion in your life, you were great. 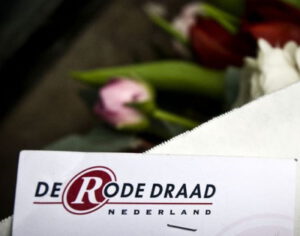 Jan Visser, on behalf of www.SekswerkExpertise.nl